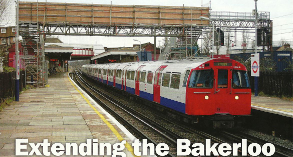 "Jonathan Roberts of JRC writes about the prospects for Bakerloo Line extensions in the next two decades. He has recently advised Lewisham Council on the prospects of a South East Extension."

"The Bakerloo Line is a paradox. It reaches way out into the suburbs, as far as Wembley and Harrow, in the northwesterly direction."

"However, its southeasterly route terminates abruptly at Elephant & Castle (now the edge of Oyster Zone 1), just as it did in 1906. Ideas and formal proposals have kept on emerging for extensions beyond Elephant, in the decades from the 1920s onwards. A Camberwell extension was desired from the 1920s and made it to the tube map in 1949, but affordability and a poor business case stopped the scheme in 1950 before major works began."

"Is there enough that is new and different about the economic and transport situation in the 2010s and foreseeable into the 2020s and 2030s - to make a more favourable case for new extensions beyond the Elephant, and possibly also to the northwest?"